Iran: There’s No Room to Breathe

Arseh Sevom — Tehran celebrated “clean air week” last week, while the blue sky and the beautiful city were hidden by a blanket of smog. “Just leaving the house makes my chest hurt,” a Tehran resident told Arseh Sevom. Increasing pollution and smog is causing eyes to tear and dizziness. It has forced the closure of schools and public institutes two days in a row last week.

An advisor to Iran’s health minister, Hassan Aqajani, appeared on state television to report on the effects of high levels of pollution in Tehran. He reported that 4460 fatalities were connected to foul air during the previous year.  Aqajani reported a significant increase in emergency calls when air pollution deteriorates in Tehran. “The hospital admission for heart diseases increased by 30% following the recent air quality alert in Tehran.”

Many mainstream media outlets picked up the issue, reporting on different aspects and warning of the pollution and its potential harm to Tehran residents.

“…with air pollution at such high levels, venturing outside could be tantamount to ‘suicide,’ state radio reported Saturday.”

Low quality gasoline has been blamed for the dramatic increase in pollution in Iran’s big cities. Iran began refining its own oil in response to sanctions. According to Tehran Bureau [en], in comparison with 2011, 2012 saw a doubling in the number of days with dangerous levels of pollution. There was a staggering 218 days with dangerous air quality. The article notes that efforts to tackle the problem are hampered by political infighting and a failure of cooperation between President Mahmoud Ahmadinejad’s administration and the Tehran municipality. 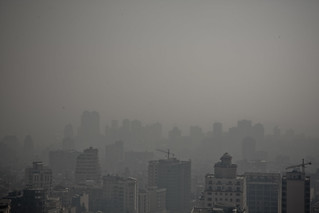 Tehran’s pollution was discussed among Iranian netizens too. They emphasized the difficulty breathing in Tehran. Some have tried to share their recommendations on how to survive the situation and what each individual can do to contribute to better weather conditions.

‘Metoyou10’ [fa] blog starts her post with a couple of satirical text messages which have been exchanged in Iran on this issue. She continues by saying that although these text messages make you laugh, the reality is quite scary.

“I finally understood the reason of my recent headaches. Breathing all these poisons and smog… try to drink milk as much as you can these days.”

She then touches upon the habit of driving to work by sharing her story.

“Like in the old days we took a cab to work this morning, and it took us only 15 minutes to get there. Mr. Mim [her partner] kept on nagging and I realized how dependent he is on his car and cannot take even one day off from it! But I liked it!”

Gahar [fa] starts a post by saying how routine the pollution has become for Tehranis.

“A few years ago, hearing that Tehran’s weather is at a critical condition would scare us and make us stay home in order not to be choked! But it’s been a while now since smog over Tehran, even at this critical point, surprises anyone anymore…”

The blogger then provides a thorough list of what to eat and drink to better protect the body against air pollution.

Other netizens have taken a critical stance through their posts. On his Facebook page, Sadra Mohaqeq republished an article he wrote for Shargh Daily [fa]. The article emphasizes the significant relationship between the increase in the average number of deaths and the air pollution during the month of Dey [the tenth month of Persian calendar: December 20th to January 20th]. Double-checking his data with Zahra’s Paradise [Tehran’s cemetery], he reports:

“Interestingly enough, the death rate has increased since the unprecedented sanctions were imposed and local petrol has entered the consumption cycle.”

Rhino Season [fa] has also posted news on the number of referrals to the hospitals and the death rate and cancer cases related to the air pollution. This blogger reiterated that the substandard locally produced petrol was the main factor in the increased pollution.  In another post [fa], he sarcastically reacted to the use of Methanol instead of ethanol in Iran’s petrol production chain. It’s worth mentioning that methanol is a poisonous chemical derived through synthetic processes, while commercial ethanol is produced by factory fermentation of food crops.

Masoumeh Ebtekar has also reacted to this topic in her blog. In her post [fa] Air pollution and the tale of two cities she republished an article she wrote two years earlier, stating: “this is just a reminder…” She compared Tehran with Mexico City and talked about the policies reinforced in the latter to overcome the pollution issue.

“The reality is that plans to reduce the air pollution in Mexico City in terms of population, social dimensions, and numbers of automobiles have been very similar to Tehran’s and yet it has managed to succeed through a similar plan approved for Tehran some eleven years ago…The main question is why one (Mexico City) succeeded and the other (Tehran) is still wandering around the corner?”

In a post addressing the government, Zeytoon [fa] says:

“Mr. Islamic Government… We have regretted not having many things; but [please] be kind to us and give us back our oxygen!”